AUDIO FILE HAS SIGNIFICANT CHANGES FROM THE TEXT

This is the Word of the LORD to Zerubbabel
“Not by might, nor by power, but by my Spirit says the Lord”

I often joke that NZ is far from perfect for visitors from England, for the two things most English holidaymakers treasure most, Sun and Sea are the only things likely to kill you, here, so benign is the country 🙂 Of course that omits both earthquake and Tsunami – perils I have to admit we didn’t face in the landlocked and grey parts of Lancashire from whence we came.

Obviously Tsunamis must have been playing on my mind, for a couple of weeks ago I was awoken by the most vivid nightmare – standing on the shore at St Claire, and looking out to sea the horizon filled with an evilly yellow wall of water on the Horizon, and the air turning dark and tangibly moist as it moved ominously closer. It was the only time I can recall having a dream where I could feel moisture, as if the air were thick with it, and no I wasn’t sleeping in the bath again 🙂

Of course, the perils of the sea were on our agenda at General Synod. Yes, thankfully, we did consider more weighty matters than sleeping rights. Archbishop Winston gave a rich an at times incomprehensible address on ‘Moana’ theology. The theology of the Ocean – with the telling line – our vulnerability is yours also. And Bishop Api in a long speech on a fossil fuel divestment motion paid harrowing testament to sea level rise. Invited by his flock to visit their burial ground, now below water.

I have more than a degree of sympathy with one commentator on Synod who complained at receiving 30 emails regarding the sexuality motion, and none on the motion on Mission. But I wonder what our brother and sister Christians from Polynesia – quite literally the marginal partners in our church – made of the use of our time, given their situation. The word Apocalyptic would not seem to be out of place. Apocalyptic – and most timely for our readings this evening.

In the Salvation Army – they have a practise which I quite like. At each service, people are chosen at random to bring a word to the gathered congregation – I wonder how any of us might feel about having to do that tonight, with our two readings 🙂 From the prophet Zechariah ‘The hands of Zerubbabel have laid the foundation of this house; his hands shall also complete it. Then you will know that the Lord of hosts has sent me to you. For whoever has despised the day of small things shall rejoice, and shall see the plummet in the hand of Zerubbabel.
‘These seven are the eyes of the Lord, which range through the whole earth.’
Or  From the better know Book of Revelation, immediately after the passage widely used at funerals about the new heaven and the new Earth, But as for the cowardly, the faithless, the polluted, the murderers, the fornicators, the sorcerers, the idolaters, and all liars, their place will be in the lake that burns with fire and sulphur, which is the second death.’ Then one of the seven angels who had the seven bowls full of the seven last plagues came and said to me, ‘Come, I will show you the bride, the wife of the Lamb.’

Both of our readings come from what we call ‘Apocalyptic’ literature in the Scriptures – And ‘Apocalyptic’ does not have a good name amongst us. We might well think that these are quite bizarre Scriptures, written by people with serious psychiatric problems.

What indeed might we ask has anything of This to do with us??? We think of the Book of Revelation and those strange cults which use it as a prophecy for the end of the world – we imagine perhaps it better left alone.

But we would not do well to do so, for our faith is an Apocalyptic faith [Those thinking the Vicar has finally lost all touch with reality may if they wish leave at this point 🙂 ]
Our faith, I say again is an apocalyptic faith, and perhaps the at times incomprehensible nature of Archbishop Winston’s speech is that we have ourselves long ago forgotten that.

Firstly Christian faith is birthed in a Jewish culture where Apocalyptic writings were one of if not the chief form of religious writing. Since the time of the exile such writings had become increasingly prevalent. Following the Old Testament as we have it – we have the writings of  Ezekiel – from the time of exile of the Jewish people to Babylon – with its vision of the glory of God in unreproducible imagery -then Daniel (we know Daniel mainly for the stories of the lions den and fiery furnace, stories in themselves Revealing, but in Ch 9 to the end the writing is all openly apocalyptic) On into the minor prophets and perhaps especially Zechariah – our reading for this evening and a book of strange vision after strange vision

Secondly we know of Many books of such a type written about the time of Jesus and just before. Several of which, such as the books of Enoch were very important influences in the church of the first three centuries, until St Augustine amongst others put a stop to that thank you very much – I’ll come back to Augustine in a moment

Third –  the New Testament itself – yes of course we know of Revelation, but the gospel of Mark and indeed of John bear powerful witness to being birthed in apocalyptic imagery. With regard to the authorship of Revelation we tend to read Revalation in the light of John and so think they cannot possibly be authored by the same person, but if you read them the other way round, that is read John in the light of your reading of Revelation . . . well I’ll leave that with you for homework 🙂 ‘My soul doth magnify the Lord – he hath cast down the mighty from their seat and hath exaled the humble and meek’ Apocalyptic in the heart of Evensong!

And most clearly we see this in the very words of Jesus – Blessed are you poor, for yours is the Kingdom of heaven! Blessed are you meek, for they shall inherit the earth!

Well – you may well say – you have made a case for the Scriptures being apocalyptic, and perhaps thus driven us thus further away from reading Anything in the BIble – I hope not – but surely our faith is not apocalyptic??

Well – lets go back again to the writings. What is the context for this writing? It is all rooted in a people who are under immense pressure – in exile, in prison, under occupation – it is a writing rooted in people who live in fear of their name being totally wiped from the consciousness of history. It is thus a writing from people under the harshest extremes of living – it is the language of hope when all hope seems to have been lost – it is Dream like in its nature, for to those whom it addresses it must have seemed like a dream. Those who have sat down by the streams of Babylon, taunted by their persecutors to sing the Lord’s song in a strange Land, are given through for example Ezekiel a vision of the restoration of all things.

And then finally one comes
triumphant and victorious is he,
humble and riding on a donkey,
on a colt, the foal of a donkey.

Jesus is an Apocalyptic figure. This sign of hope from Zechariah, the book we have heard from this evening – makes no sense on our terms, none at all

Who amongst us takes with any degree of seriousness Jesus in his humility as the pattern for our lives. We live in a ‘get things done culture’ – we seek people who will achieve – and our King comes humble and riding on an donkey

So we hear from our reading this evening – This is the Word of the LORD to Zerubbabel
“Not by might, nor by power, but by my Spirit says the Lord” . . .

I said earlier that it was St Augustine in particular who had been the one to eliminate the reading of the apocalyptic literature such as Enoch from the life of the church – Augustine who was also the first apologist for Christendom. That move of the church from the margins – clinging on like moss to a stone in a storm, yet flowering abundantly – growing not by might, not by power, but by the Spirit of GOd – moving from that to taking the reins of power. no longer the reins of the donkey, but that of the mighty steed – indeed the warhorse as Augustine makes the case for just war. Christian faith moves from being Apocalyptic, dependent on God – learning Hope, to denying Apocalyptic, taking power into its hands to write its own story. And now? And now??

One of the tremendous priveleges of this past week at Synod was a boat trip to Oihi bay, accompanied by some of ArchBishop Winston’s denizens of Moana – as we sailed amongst a pod of dolphins . .  finally we came to the new Marsden Cross interpretation centre – set up upon a hill, overlooking Ruatara’s Pa – from where away in the distance, tiny on the shoreline we could see Marsden’s cross – that place where the gospel was first preached in these lands just 200 years ago. 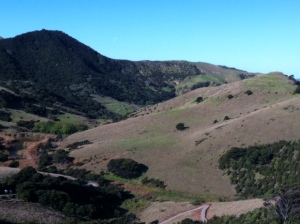 From the viewing sight it looked so small and insignificant – one had a real sense of how those early missionaries were as it were clinging to the edges of existence. We reflected on how they were utterly dependent on the Manaaki Tanga of the Maori – the hospitality – like those first disciples of Jesus who went without bag or purse or sandals. People on the edge, people of the edge – the place of dreams and visions, the place of Apocalyptic.

That is our faith – our story – living in dependence – not by might (strength), not by power (ability to control things) but by the Spirit of God

Apoclayptic writings we find strange and threatening – yet they are the root scriptures of our true story. The challenge for us is to live deep into the reality of them – as Jesus tells those who follow him – giving up our possesssions to become his disciples, people of the edge, between heaven and Earth – people who See the Revelation – people of the Apocalypse.

This site uses Akismet to reduce spam. Learn how your comment data is processed.

That they may know the only true God

the church of the future is around a table